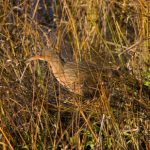 The Breuner property, located in Richmond on the southeastern end of the San Pablo Bay, includes 238 acres of marshes and coastal prairie land. The property is the only possible path for the San Francisco Bay Trail to connect in the area. The Bay Trail project will form an unbroken pathway along the San Francisco Bay shoreline. Bay Area Wetlands LLC bought the Breuner property in 2000 and intended to sell it to the highest bidding developer. Several development plans were proposed, and at one point plans to construct “Edgewater Technology Park” were nearly finalized; environmentalists and members of Parchester Village, a nearby community, fought back to protect the site. Development plans were dropped after the outpouring of community response. In 2008 the Easy Bay Regional Park District acquired 218 acres on the property through eminent domain. The property now serves as a regional park. In 2012, the EBRPD conducted its final EIR under CEQA and was cleared to begin restoration and construction of the Trail and other key facilities that will protect the space and its wildlife, including the endangered California Clapper Rail, and prepare it for public enjoyment in fall 2013. After years of uncertainty, CEQA has finally ensured that this property will serve as an environmental sanctuary for all to enjoy.