Posted | Comments Off on ConocoPhillips: CEQA and Oil Refinery Expansion 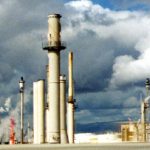 In 2003, the ConocoPhillips Company proposed an expansion of its Rodeo oil refinery in order to produce cleaner burning low-sulfur diesel fuel. While this goal would benefit California in the long run by reducing overall emissions, the construction and subsequent increased production would harm the immediate area by causing increased air pollution. Communities for a Better Environment and several labor unions reviewed the Draft EIR and determined that the project would increase cancer risk in the surrounding community, create higher levels of particulate matter and diesel exhaust, and generate sulfur-related odor impacts. Working with ConocoPhillips through the CEQA process, CBE and the unions were able to devise several mitigation strategies to reduce localized impacts while still allowing the project to move forward. These measures included the installation of a high performance drift eliminator to reduce particle emissions and the usage of ultra-low-sulfur diesel fuel to reduce diesel exhaust emissions, among many others. Because of the CEQA process ConocoPhillips is now producing cleaner fuel that benefits all of California while still protecting those who live closest to the refinery from harmful emissions.