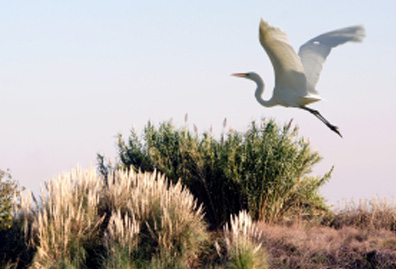 After rapid expansion in the mid-1980s, Contra Costa County recognized the need for a new landfill and decided to take action. The County Community Development Department conducted a program EIR and selected Keller Canyon as the site of the newest countywide solid waste processing facilities. Located in the hills behind Pittsburg near the Sacramento River Delta, Keller Canyon boasted the most centralized location, the shortest haul times, and the fewest estimated impacts on transportation and air quality. A more rigorous EIR was then conducted for the project, with the CEQA process taking nearly two years to complete. The primary threat, the analysis revealed, involved leachate leaching out of solid wastes into surface and ground water. With the City of Pittsburg and the Delta downstream, preventing contamination was vital to public and environmental health. Mitigation measures involved design alterations that would limit and contain the harmful waste in a complicated composite leachate control system. A monitoring well system was also installed to detect off-site leaking. After years of extensive planning, the project was approved and constructed in the early 1990s. CEQA played the integral role in shaping the state of the art facility that remains a model of an environmentally sound landfill today.